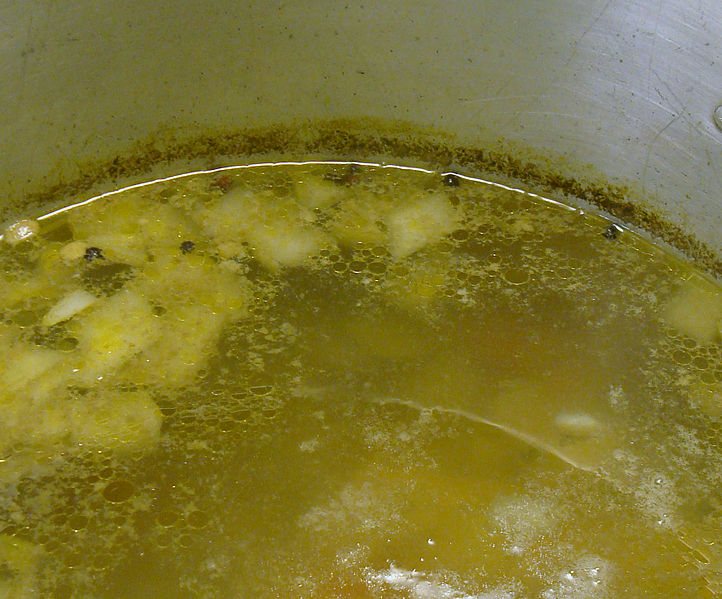 I haven’t wanted to write this post simply because of the faddish nature of the subject of ‘bone broth’ / ‘meat stock’ / whatever. (Incidentally, my kids have dubbed it ‘chicken noodle soup without the chicken or the noodles,’ so add that to the list.)

But today I discovered yet another sad societal turn of events. Today I learned that bone broth K-cups are a thing.

But let’s start at the beginning.

Ok, so technically, ‘bone broth’ isn’t broth at all, but rather a stock. Broth is defined as a thin, savory liquid made from water and bits of meat and/or vegetables. Stock is normally denser, and made from roasted bones (the bones and bits of cartilage, etc. providing a more rich, sometimes gelatinous quality to the liquid) with maybe some meat attached. For the purposes of this post, and to not add to the naming confusion, I will stick with referring to it as ‘bone broth,’ although bone stock, or simply stock would be more accurate.

Regardless of the name, both are useful, delicious, and nutritious drunk alone, as a basis for soup, or added to dishes in lieu of water (boiled rice, vegetables, mashed potatoes, etc.) for a boost of flavor.

Proponents of bone broth as a life staple claim that simply the act of drinking bone broth will drastically improve your health in every way. Things like increased energy, healthier skin, shinier hair, stronger bones and joints, better sleep, weight loss are put out there, along with gut healing, boost your immune system, get rid of food intolerances, and detoxify. The more reasonable sources add ‘may’ or ‘might’ to their benefits, but some (especially the ones who have their version to sell you) leave all uncertainty out. This product will fix it all. On paper, it appears that simply the act of drinking this liquid will make everything better!

Of course, because this magical substance called “bone broth” can do so much for your health, you want to get it just right. After all, no simple stock could possibly have such magical powers! So I looked up the recipes for “bone broth.” From what I found, the recipes average 8-10 ingredients including some off-cuts of meat/bone that you have to ask someone at your local butcher to get your hands on, very specific measurements, temperatures, and cooking times, and boiling/blanching/roasting… time, effort, planning, and lots of it.

I even found several articles covering all the ways “you’re doing it wrong.”

It’s no wonder companies are capitalizing on boxed and canned “bone broth,” instant “bone broth” powders, and now even bone broth in a k-cup (at $2 a cup, btw)! There are even bone broth “restaurants” out there charging $4-$8 for a cup of their bone broth! Since the whole process is complex and time consuming and involves potentially unfamiliar cuts of meat (bone) and you could be doing it all wrong anyway, might as well pay some factory company somewhere do all the heavy lifting, and what is two to four to eight dollars when it comes to impeccable healthy anyway? And if you can get it in a convenient little plastic cup, even better. One button push to fixing all that ails you!

What’s in it anyway?

Amino acids, protein, glucosamine, gelatin, collagen, minerals like calcium and magnesium, and a slew of other essential vitamins and nutrients. And water. Again, on paper, that sounds like a delicious super vitamin/supplement alternative. BUT, just because it’s in there 1) doesn’t mean your body is absorbing it in a way that is useful, and 2) doesn’t mean there’s enough to make a huge impact, especially if you are consuming the pre-made stuff.

As an example, a cup of the bone broth I occasionally buy when I’m in a pinch (thought I had some in the freezer, promised a specific recipe, oops, none in the freezer…), has 20 mg of calcium per 8 ounces, while an 8 ounce glass of whole milk has over 200 mg of calcium. Some of the powdered broths claim more than 20 mg, which makes me question the whole “powdered broth” process that much more. Additionally, it has not been shown that the act of simply consuming gelatin or collagen actually gets it to your bones/joints/ligaments in a way that is useful or supporting to your body.

My take on bone broth

I do make bone broth regularly, to drink, to cook with, to make soup. I do give it to my children regularly to drink. I do believe there is some healing power to it, but not in any magic pill sort of way. It’s much more whole-istic than that. And I really believe it needs to be to get any real benefit.

Bone broth, or stock (or chicken noodle soup without the chicken or the noodles) is about the wholeness of it the thing. It originated back when people made use of all the parts and didn’t just throw out the “icky” parts or the parts that weren’t pretty. It’s from when food was short and nutrition was scarce. From the time that sayings like “Snout to tail,” or “From the rooter to the tooter” were heard. There are only two drumsticks on a chicken, and only so many prime steaks on a cow, but there is a whole lot of other stuff that is just as full (if not more so) of nutrition and can fill your belly just as well.

For me, bone broth is more about a mental place than a superfood. It’s about not wasting. It’s about getting every bit of nourishment out of an animal that gave its life for my family and I. And it’s about something delicious that can be a nice warm drink, or a food-medicine for colds and flus, or upset tummies and digestive woes.

It’s not that I don’t believe there is any health benefit to it either. I know that adding any  minerals is a boost to the body and energy levels. I know that the extra water is probably what contributes to healthier, glowing skin and shinier hair. I know that the gelatin and fat coat my digestive tract and stomach when I’m not feeling well and sooth the whole system. I know that simply breathing over a hot beverage moistens my nasal passages and sooths the mucus membranes, especially when the weather is dry or I have a cold.

What I believe is simply adding a daily cup of bone broth to a diet full of fast food and microwave meals isn’t going to give any health benefit, and certainly not the amazing benefits that are advertised. Drinking a cup of bone broth in place of your afternoon diet coke might do something, but it’s more about not drinking the diet coke than the bone broth. Real health requires a commitment and lifestyle adjustment. It’s an exercise in wholeness, not something that can be got quick from a pretty package.

It’s really not. I promise.

Last night we had roast chicken for dinner. It’s my lazy meal, when I don’t feel like thinking about it too much and I don’t want to stand over the stove.

I bought a whole chicken, pulled out the giblet back, stuck the whole chicken in a pan with some chopped veggies and herbs, sprinkled with salt, pepper, and garlic powder, and stuck it in the oven for 1 hr and 20 minutes.

After dinner, I collected all the bones from the chicken pieces that were eaten and put them in a crock pot. I pulled the remaining meat off the carcass, put it in a container for tonight’s dinner, and stuck those bones in the crock pot. I also emptied the giblet bag in the crock pot (sometimes I cook and eat them, sometimes I’ll bag and freeze them for later, but like I said, I was feeling lazy). I collected whatever vegetable scraps I created from dinner (carrot ends and skin, celery ends, onion and garlic ends and skins, herb stems) and tossed those in too. I filled the crock up with water and a splash of apple cider vinegar, and set it on low.

This morning there was deliciousness ready to drink in the crock pot. Yes. That easy.

I do this after every meat meal that has bones: steak, bone in chops or roasts, chicken, even fish. All the extra bits go in…the excess fat, the gristle, the joints, the giblets, the feet to the heads (if you’ve got them) and everything in between. And whatever veggie/herb scraps I happen to have. No recipe. No stress. No waste. Whatever is left on the bone, whatever nutrients can be pulled out of the bone and marrow (the vinegar helps pull that out and dissolve the minerals into the stock), whatever throw-away bits there are. I don’t normally add salt or pepper to the crock pot, and only whatever herbs throw-away bits that are around, simply to keep the flavor fairly neutral in case I want to use it in a dish. I can always add whatever additional seasoning I want when I use it.

By morning, it’s ready to drink, adding whatever seasoning to taste. Normally, I’ll leave the crock pot going on low for a few days to get every last bit of goodness out of the bones. If I spoon out a cup to drink or some to use, I’ll replace the water and keep it going until either the broth starts looking really thin (light, clearish), or the bones are soft enough to crumble. I’ll then turn the heat off, let it cool enough to pack in containers and either put them (labled…you don’t want to pull out crab stock when you meant to get chicken stock for chicken noodle soup!) in the fridge for 5 days, or freeze them. If freezing, don’t forget to leave at least an inch of headspace for expansion.

If I don’t have enough bones, I’m feeling especially lazy, or my freezer is full of stock already, I’ll stick the bones and scraps in a ziplock in the freezer for use later.

Also, if you need a veggie broth, it’s just as easy…maybe easier to make than the meat bone stock. I keep all the scraps from meals in a gallon ziplock until it’s about full. Then put it all in the crock pot with water. I don’t ever cook it as near as long as a meat-based broth, maybe 6 hours to overnight, and it’s a good way to use up all those bits that would end up in the compost or trash. Almost anything can go in there: carrot ends and peels, celery ends, herb stems, cabbage ends, pepper innards and stems, onion and garlic skins, just nothing that shows any signs of going bad. And after it’s done, you can still compost the solids.

So if you want to try to make “bone broth” on your own, don’t get overwhelmed with how it’s “supposed to be done.” Just do what you can with what you have and I promise it will be wonderful.

If you are going to replace something less with something more, bone broth is probably a decent way to do that…even if it is in some instant, easy package. I feel homemade is better (and cheaper), but every real change comes down to that first baby step. Go for it any way you can!

If you want to drink bone broth as part of a new health kick, but don’t want to kick all those other bad habits and poor diet choices, don’t expect miracles to happen. And take a good listen to your body and see if maybe those choices are why you can’t quite get to the health you want, not the lack of the next big supposed superfood in your diet.

View all posts by JT